So it’s May, sunny and warm, and the skies are a perfect blue … and there is a disaster unfolding in my backyard.

This is not confined to the backyards of those of us who live on the Gulf, though our lifestyles and livelihoods are certainly at risk. This is global. So far currents have been on our side, but what happens if/when  this gets into the Gulf Stream? Granted, yes, the oil would probably be more spread out, but dispersed poison is still poison, and anyone who has ever ruined a recipe with too much salt or messed up a home hair dye job knows a little bit of this and a little bit of that can make a huge difference. And yes, we need to worry about the plankton, and the animals that feed on it. The food chain is third grade science. We’ve got ipads and nanoscopic robot spiders, but we’re still part of it.

The Gulf Stream is basically the giant oceanic conveyor belt that keeps the ocean circulating. It regulates a lot of things, mainly temperature and climate. It’s cooled roughly 30 degrees since 1957, due to manmade causes. What happens if the warmer water can’t rise because of the oil? What happens to the methane that starts to dissolve and is released as a gas when temperatures warm? Scientists were already concerned that it could collapse. How this will affect an already-stressed system is anyone’s guess, but the scientists concerned about the food chain are by no means nutjobs.

So, this is one month in. For worst case scenario, triple that amount. But even if they stop it tomorrow, it’s already catastrophic. Even if the top kill works, the surface area of the spill will get larger,  because most of the oil hasn’t reached the surface yet. Below that top layer are columns of  death in the water. And then add more dispersant toxins in. Then the dead fish and animals that will be floating around in that.

And to top that off, there is of course a storm coming, and it’s pretty much anyone’s guess what that could do.

I couldn’t even finish this blog without a wtf moment. Apparently, despite the moratorium on drilling, seven new permits have already been issued.

I’m beyond livid, and it’s hard to not feel helpless. But there are things we can do, mainly, buy green. Every time you plunk down a few dollars for dish soap, paper towels, or canned foods, you are casting a vote. It’s time to make conscious choices, and support eco-friendly companies. Most of us aren’t in a position to just cut ourselves off from oil; we can’t stop driving, and I sure as hell am not about to turn off the AC, but we don’t have to choose to support irresponsible corporations. This isn’t just about oil, and our addiction to gasoline. It’s about coal and toxins and waste and water and plastic too. America is about choice, and we can choose to break the stranglehold Big Oil has on our governments and us. The sad thing is, these oil giants are really the companies that are in the best position to move forward with clean energy. They are making record breaking profits, and they are at the base of the energy infrastructure. We can’t afford to wait for them to change. We  need to change.

We can choose not to support this

And the seas turn to blood …

Deepwater Horizon – what a perfect name for something that fouled our deep water across the horizon. 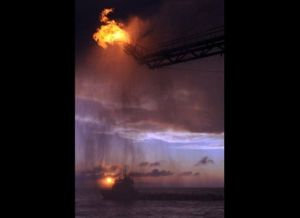 Rare white whale, sacred to some, myth to others. Will it too, have to swim through oil?

I realize this is ranty and possibly a bit doomsday-ish, but they’re setting the ocean on fire.